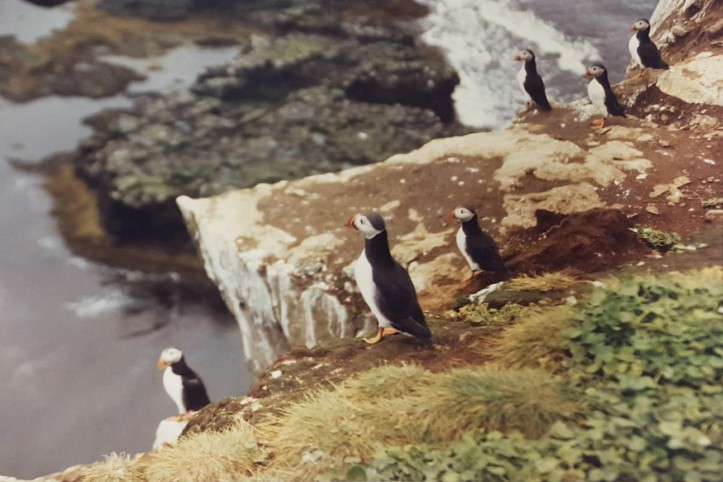 I want to do something different.

In Bolivia, I ascended to the same elevation as the Mount Everest Base Camp and went shopping in the witches’ markets. That was after nervously crossing the border having been on Peruvian television the previous night participating in a protest.

In Egypt, I descended deep inside the Great Pyramid and laid down in the sarcophagus.

In Russia, I ran backwards photographing a pro-Soviet protest bearing down on me from Red Square. Chins up and chests out when they spied me, sickle and scythe flags held with military pride. Secret servicemen observed, and listened to tiny earpieces.

In England, I attended garden parties at Buckingham Palace and the Royal Enclosure at Royal Ascot.

In Iceland, I travelled up inside the Arctic Circle to visit these Atlantic Puffins. Crawling on my belly to the cliff edge, I leaned out over the vast Arctic Ocean, being careful not to spook the birds guarding their single eggs.

I want to do more of this, going where most people have never been. Experience interesting things.

When I went to see these puffins, it was on a ferry better described as a fishing trawler come ice-breaker. It expertly rode the ocean swell, however my stomach was less adept.

Here in Australia, I was the first to drive a Skoda Yeti into the Outback. I was the talk of every pub, no one had ever seen a red and white Yeti before among all those dusty Toyotas. I went as far as Burke & Wills’ iconic Dig Tree in the desert, and home again.

Maybe something like that, closer to home. Whatever it is, it’s something I haven’t done before.