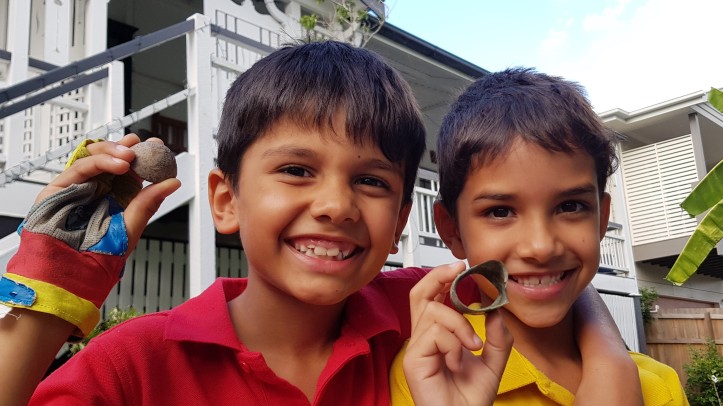 I hunt for treasure in the grounds of old buildings, using my Minelab metal detector to peer beneath the surface. I then research the finds and look for links to real people. Recently I took my new friends Jai and Ravi on a treasure hunt around their home, and even I was stunned with what we found.

Jai and Ravi’s home was built in 1897 in the attractive Queensland colonial style, high set and with cooling verandas. The omens for finding military relics in the historic district were good – the street was named after a First World War British general, and just a few blocks away had been a 19th century magazine for ammunition storage. Best of all, young Jai and Ravi, seen in the photograph above, were super excited to find what treasure lay hidden beneath their feet. They live in Brisbane’s Sherwood district rich in social history and ripe for a trip back in time.

The 1950s saw the escalating Cold War. The communist party in Australia was banned and the Petrov Affair claimed Soviet spy rings. Amidst the pandemonium, in 1953 right at the end of Jai and Ravi’s street on Oxley Road, the radical left-wing activist and federal senator Gordon Brown launched an election campaign with a rally.

Living in the same street as Jai and Ravi in the 1940s was Pilot Officer Albert Collier. Collier was lost in an air battle over Berlin in 1943 while serving with the Royal Australian Air Force in the Second World War. There are Colliers in my mum’s family.

In 1921, Sherwood was connected to electricity for the very first time – the 97th anniversary was last week – when shire chairman Charles Lyon officially switched on the light at the corner of Oxley Road and Martindale Street. That’s just down the road from Jai and Ravi. It’s forgotten history now because no plaque marks the site.

The Sherwood magazine was built 1892. It was a small magazine in which the Queensland Defence Force’s filled shell was stored safe from possible damage of damp or floods. The ammunition was for Queensland’s shore defence at Fort Lytton at the mouth of the Brisbane River. The photo here shows the men of Fort Lytton at the time. The commandant of the Queensland Defence Force was Major-General John Fletcher Owen. He had served with distinction in the Zulu Wars having been mentioned in dispatches in 1879. With the newly federated Australian government taking over the responsibility for defence in 1901, the magazine fell into disuse, and by 1902 it was overgrown by lantana.

My hunt for buried treasure with Jai and Ravi started in the front yard of their home. We found a number of small decimal coins, and more in the backyard despite it being dominated by a swimming pool. On the eastern boundary, however, was an old fruit tree and an area that had been used for a clothes line probably since the house was built, which suggested that the earth there had not been disturbed for a very long time. This is where we found the three most exciting relics, which are seen in the photograph below.

One was a corroded yet beautiful ninety-four-year-old Australian penny, minted in 1924 when King George V was on the throne and shortly after electricity came to the area. Then we found the two stunning items that transported us further back to when Queensland was still a British colony. It was one hundred and thirty years ago to when the Sherwood magazine was in use, and Major-General Owen was a visitor to the district.

The Australian War Memorial has confirmed that the item on the left is the top section of an artillery fuze from coastal artillery that was emplaced in the colony during the 1880s and 1890s. The other item is the remains of a cartridge case that was used in the Vickers/Nordenfelt machine guns, often referred to as “pom poms” because of the noise they made, and also used in coastal defence at this time.

Both items were stored near Jai and Ravi’s 21st century home for use at Fort Lytton in the 19th century. There are examples of the old guns at the fort’s museum today. But Jai and Ravi need only play in their back yard for a reminder of people from two centuries earlier. You never know what history lay under your feet in your own backyard.

Photo credits:
Jai and Ravi 2018 – my own
Queensland Defence Forces at Fort Lytton 1893 – State Library of Queensland
Colonial Queensland artillery finds – my own