Muskets in the mud flats 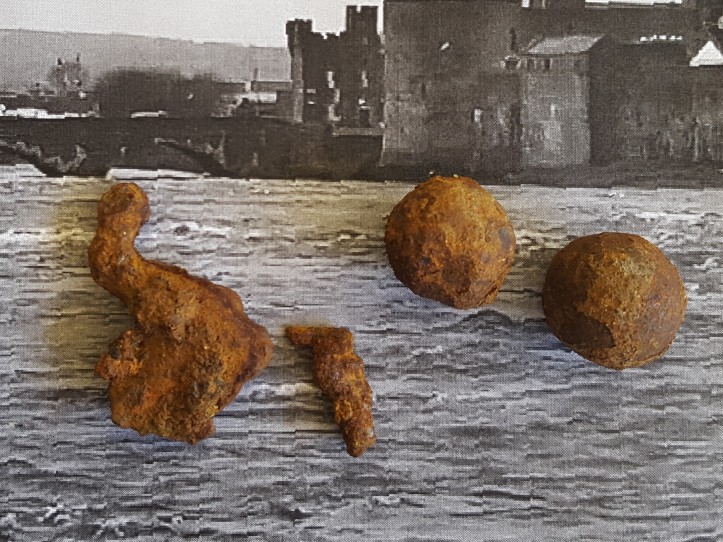 The leather satchel, its shoulder strap flowing like seaweed in its wake, speeds downwards, contents imploring it to race faster. A French musket follows. One, then the other, touch bottom and settle in a hollow perhaps made by Manannán himself, the sea-god of Irish mythology. Above is the chaos of battle, flashing gunpowder, slashing blades, blood, and large dark shadows floating ever down. One of them no longer has a need for his musket and ammunition that are soon hidden by the swirling mud of Ireland’s longest river. This year is the 325th anniversary of the Siege of Limerick of 1691. Reminders are all around.

King John’s Castle is still there today guarding the city. Spanning the River Shannon to the castle’s entrance is Thomond Bridge, although this one’s new, a seven-arch rock-faced limestone construction built on the same site 180 years ago.

At low tide it’s possible to explore the mud flats below the castle walls. When the light is close to the horizon, ghosts sometimes whisper from the sand in the form of small shadows on the silvery surface. Like this rusty musket hammer and musket balls. The large bore matching that of late 17th century infantry.

Cogadh an Dá Rí, meaning “war of the two kings”, was fought between Jacobites, supporters of the Scottish Catholic King James, and Williamites, supporters of the Dutch Protestant Prince William. The prize was the kingdom of England, Scotland, and Ireland. Limerick’s Thomond Bridge was the scene of one of the most horrific events in the island’s history.

As a cold chill descended on the afternoon of the 22nd of September 1691, four regiments of infantry and English grenadiers of the Williamite army attacked. They forced the Irish Jacobites and their muskets reeling back towards the bridge. The command was hurriedly given to raise the drawbridge and halt the enemy advance. However, the French commander of the gate panicked and the drawbridge was raised too soon. The fleeing Irish were trapped outside. With nowhere to go and no room to fight, they were slaughtered on the bridge as the Williamites refused pleas of surrender. All this happened before the tearing eyes of the disbelieving defenders staring down from the ramparts above. Of the 850 Irishmen who got onto the bridge, only 12 made it inside the castle, 118 were taken prisoner, and over 600 were butchered or drowned in the turbulent waters below.

With the situation hopeless, the Irish commander negotiated an honourable surrender. The Treaty of Limerick was signed on a stone in full view of both armies.  The Treaty Stone now rests at the Clare side of Thomond Bridge, with King John’s Castle in Limerick on the other. They cast a mournful view over the mud flats and more ghosts of rusty musket hammers and musket balls from that dreadful day.