If your attention deviates in the desert, the camels will soon pass you and you’ll be lost. On this occasion, however, expedition leader and chief scientist Dr Max Tischler had stopped the two strings of sixteen camels.

Ecologist Rick called out that he’d found signs of the Burrowing Bettong, a small kangaroo-like animal now extinct on the Australian mainland. But something in the clay pan caught Max’s eye. He kicked it, and from the dry red earth came a remarkable tale of the great 19th century explorers. See the short film here. 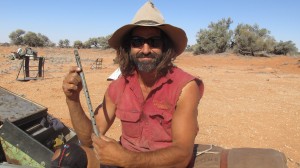 Here in the Simpson Desert, one of the most inhospitable on earth, Max had found a tin whistle (pictured). This was, quite literally, in the middle of nowhere. The place was so remote that only Indigenous people had ever passed this way, and we had already found black fella artefacts in the vicinity.

Max looked closely then handed the whistle to me. We were both hoping to read an ‘L’ that may relate to the explorer Ludwig Leichardt who went missing back in 1848. But it was not to be. Inscribed on the whistle was ‘G Steel & Co’ in the key of ‘B’.

The only people of modern times known to have come anywhere near here was a seismic survey team that plotted the QAA Line in 1979. The team supervisor was Hugh Jensen who today is 95-years-old and playing golf four times a week in British Columbia.

They complained back then that dingoes interfered with the seismic cables every night. When I arrived at the camp site, a descendant of those same dingoes of forty years ago was still lurking (pictured).

Maurie Drew, an engineer who knew Jensen back then, had also used the detonating cord that the seismic team worked with. “Detonating cord brings back memories of nightmares and hysteria,” Maurie said. “Detonating the shot was an eruption of sound, smoke, flame, stink and dust which scared every living creature – including the workers – for miles around.” 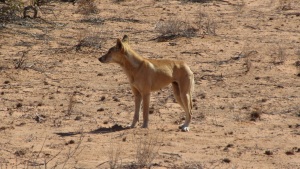 But the location where the whistle was found was well away from the seismic line and they would have had no reason to travel there.

The local Wangkangurru mob had walked out of the desert for the last time 120 years ago during the Federation Drought, so the whistle could only have come here in the 19th century.

But what would the Wangkangurru want with a tin whistle anyway? They maintained a fragile existence amongst the clay pans and sand dunes and carrying anything that didn’t sustain life was unlikely. Hence, the whistle would have been discarded after having been given or traded to them not too far away.

It must have been gifted by one of the 19th century European explorers.

In 1886 surveyor David Lindsay with the help of a Wangkangurru man ‘Paddy’ ventured into the Simpson Desert from the western edge, in the process documenting for the first time nine native wells from Songlines (Indigenous navigational tracks). Max’s expedition today is continuing that research into the Songlines and mikeri wells.

But both Max and I held hopes that the whistle came from the lost Leichhardt expedition from which artefacts had been discovered in the desert thousands of kilometres apart, but there’s nothing to suggest this is one of them.

The explorer Captain Charles Sturt (pictured) travelled up Eyre Creek in the Simpson Desert in 1844-1846. I crossed that same Eyre Creek on the way to the camel camp, so it could be him.

Sturt was known for his friendly treatment of Aboriginals including trading and gifts. Can the whistle really be that old?

There are modern examples of ‘G Steel & Co’ whistles from the 1970s and 1980s but they are Asian forgeries.

The whistle that we found is a cylindrical-bore whistle made from tin and with a lead fipple plug. That’s the defining feature – fipple plugs were made in lead from the early 1800s because of the malleability. That stopped in the 1930s when it was discovered that lead was toxic.

“The example exhumed from the desert is from a far older wave of tradition – it is a cylindrical whistle with a lead plug,” said Mitch Smith of respected tin whistle manufacturers OzWhistles. “This design came from England with the Irish convicts back in the 1800s.”

The last convict ship arrived in Western Australia in 1868, which was almost two decades after transportation to the eastern colonies had ceased after having peaked in the 1830s.

Sturt’s expedition in 1844–1846 included Scotsman John McDouall Stuart who was one of the most accomplished of all Australia’s explorers. Being of Celtic blood, perhaps McDouall Stuart’s preferred campfire entertainment was a haunting tune blown from this very whistle.

Possibly a more likely alternative is David Lindsay (pictured) in 1886 who may have gratefully given the whistle to his Wangkangurru guide Paddy. His name alone suggests he was of mixed Irish descent and an obvious recipient of the typical Celtic gift.

So maybe it was Lindsay who played the whistle, Paddy’s Wangkangurru people who carried the gift then threw it away, only for Max and I to be the next to hold.

Whatever the full story of this tin whistle, we know it is 19th century and discarded by the Wangkangurru people.

Whether it was Sturt or Lindsay or McDouall Stuart who brought the whistle into this inhospitable environment, it doesn’t matter.

It’s beautiful to dream about Paddy and his tin whistle remarkably rediscovered 130 years later under the magnificent desert sky.

I joined the Simpson Desert expedition to raise money and awareness for better Mental Health support in rural and remote communities. Please make your tax-deductible donation here which is open until 31 December 2019.