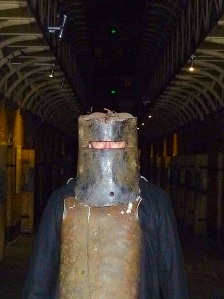 I was at ghostly Old Melbourne Gaol this week, put on Ned Kelly armour, and just metres to my left was where Ned the bushranger met his fate 135 years ago.

The night tours at the Old Melbourne Gaol are led by a performance by people with passion, pitch darkness revive what those walls have witnessed since the gold rush days of the 1850s, and so provide an eerie diversion on a cold Melbourne night.

Recently at an old family pub that was burnt down and lost over a century ago, I recovered a bullet shell of the same type fired at Ned’s Glenrowan siege. Having a spare night in Melbourne I thought why not, I’ll visit the old prison where Ned’s days were ended following the siege.

The Old Melbourne Gaol is awash with stories which are well told on the tour. Death masks are there of some of the 133 people hanged in the gaol, including Ned, and even Fred Deeming who may have been the actual Jack the Ripper.

The gallows are in situate at the end of the prison block. Walking from the same condemned cell in the footprints of Ned, how can anyone resist putting on the armour of the Kelly gang, pausing for a photo while dwarfed by the old cells in the background, and the gallows just metres away.