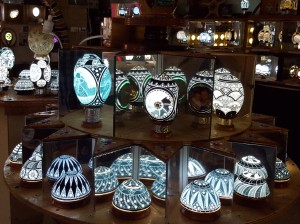 I travelled 500 kilometres for this moment, only to find the shop closed. Today of all days. I went next door for a consoling coffee. Stavros has gone to Toowoomba with 300 ‘roo skins, I was told, and then came the whole remarkable story.

Stavros Margaritis is the artist responsible for the world’s largest collection of illuminated emu eggs. They are magnificent hand-carved works of art like you’ve never seen before. Former governor general Dame Quentin Bryce and US president Barack Obama both have one. Stavros’s daughter Panorea empathised, brought my coffee, and so began a personal tour of his workshop and life.

Her father survived the barbarisms of Second World War occupation and the ensuing Greek Civil War, to embrace to the isolation of St George to work in his uncle’s café. He excelled at rugby league, and was a champion boxer who once held the tent-boxing record with an 8-second two punch knock-out. He shot more kangaroos than anyone else, reputed to be over a million.

Stavros and a business partner set up the first kangaroo processing plant in Australia. In 1980 his partner disappeared from St George amid a plethora of rumours, including that Stavros had minced him in the ‘roo plant. The police investigated, but nothing. The man is still unaccounted for today, and a $250,000 reward remains current.

Coming here at Cecil Plains I trespassed on the largest cotton gin in the Southern Hemisphere, and was given a personal tour. In Moonie, I saw the largest feral pig display in the country. Most of all I enjoyed learning about the man behind the emu eggs of St George.

A boy from Greece who survived wars at home, on the rugby league field and in the boxing ring, became one of the world’s most prolific ‘roo hunters, and is now creating unique art on the edge of the Outback.

This morning I returned to the café for breakfast, in the hope that the fascinating man would be there. He wasn’t, but I’ll be back one day to meet the maker of the famous illuminated eggs. Hopefully he would have returned from delivering another 300 roo skins.