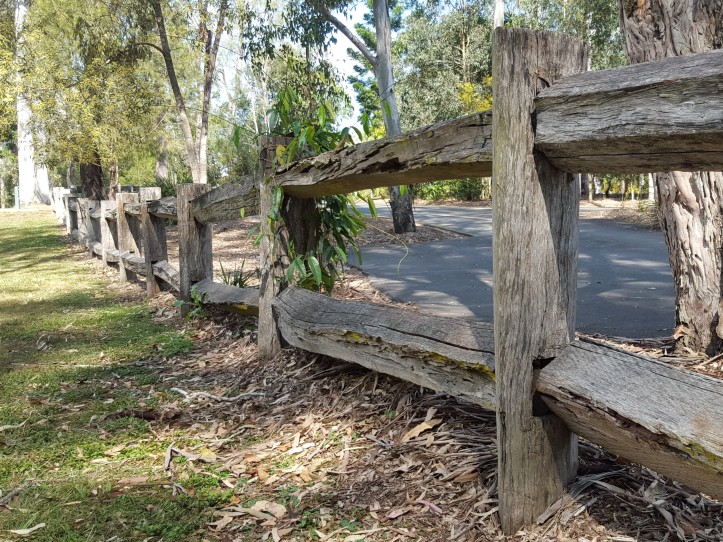 A Whipbird sounds its distinctive call through the bush, while a Willy Wagtail works busily about me. There’s maybe a dozen species of birds singing overhead, but demanding my attention is the split-rail fence. On it lands a Kookaburra that beaks a lizard far too big for breakfast. This is Rafting Ground Reserve on Brisbane’s Moggill Creek. It’s an old park with a history.

The timeworn fence was built here over a half-century ago following the park’s restoration by the lovely Country Women’s Association. I adore their morning teas. The fence is a token of the timber industry that thrived and the logs rafted downstream from here last century.

Back then Alfred Wilmott, just 21, was a Brookfield timber-getter. He was killed on this site in 1899 by a log he was leveraging off his bullock wagon. Two years later his grieving father gained some recompense for his soul, by rescuing a boy lost in the Enoggera scrub.

In 1888 seventeen-year-old William Hart dived into the creek here but didn’t see the rocks. He died two days later. William’s nephew became a war hero and chairman of the Queensland Turf Club, and today the Sir Byrne Hart Stakes is a major race named in his honour.

Sippey was a young Aboriginal man who passed through here in 1853. He was from the Bigambul people on the Macintyre River that forms the Queensland-New South Wales border, near where Goondiwindi is today. He was on the run. He’d escaped from Brisbane Gaol, charged with murder. Sippey stopped here hungry and had breakfast at John McGrath’s station just over the road. He got back to his country but was picked up a month later. The murder charge didn’t stick. But eight years later and known as Black Harry, he was hung in Maitland Gaol for murders over that side of the border.

The split-rail fence is a reminder of the people witnessed by this place, my local park. Maybe that’s what the birds are trying to tell me.