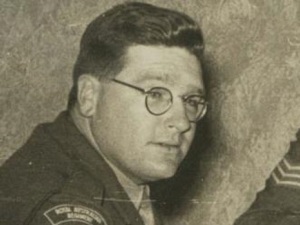 Amid the centenary of the First World War and the past week’s 70th anniversary of the end to the Second World War, another commemoration was in danger of slipping by unnoticed, the 49th anniversary of the battle of Long Tan.  Australia’s most costly single enemy engagement in the Vietnam War. The day 18 August is remembered as Vietnam Veterans Day.

The Australians of D Company, 6 Royal Australian Regiment, were attacked by a force of North Vietnamese Army and Viet Cong soldiers estimated at 20 times their number. For three torturous hours in a torrential downpour, they successfully withstood repeated enemy assaults. As a result, the Australian Task Force was never fundamentally challenged again throughout the war.

Eighteen Australians in D Company lost their lives. Overall in the war, there were 521 deaths as a result of service with Australian units. One was Francis ‘Specs’ Raffen.

He served in the post-WW2 occupation of Japan, two tours to Korea, and three tours to Vietnam. Specs served with 3 Royal Australian Regiment in Korea which received the United States Presidential Distinguished Unit Citation for its part in the battle for Kapyong. The Americans at first refused to accept radio communications from the Australians, believing that they had been wiped out. They too had held on against overwhelming odds.

Specs’ father served in WW2 by lowering his age. Three of his mother’s cousins, all from the same family, increased their ages to serve in WW1. Subterfuge may have continued in the family in Vietnam. On his third tour Specs served with the Australian Army Training Team Vietnam, at times seen as an extension of the US Central Intelligence Agency.

One week into the tour, he died on 7 August 1970 aged 41. The Australian War Memorial reports he died of “illness”. The Special Forces Roll of Honour lists him as “died of heart attack in the field, Thua Thien Province, South Vietnam.” That was the second most northerly province, and  where the heaviest fighting occurred. Sometimes the AATTV were victims of the Vietnamese personnel they were leading.

As a nation we behaved badly towards our Vietnam veterans who came home. That must never happen again. This month is also Specs’ birthday. He would have been 87. He is a cousin of my dad’s.