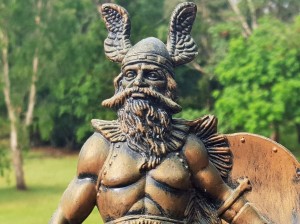 I held the figure in my left hand, turning it, I touched the features with the fingers of my right, carefully examining each in turn. Over the ensuing half century, it’s come to mean many things, much more than I knew at the time.

My dad give me a mythical representation of a 9th century Viking warrior. I don’t remember why, other than that Harold is a Viking name, inferring always be proud of who I am. But surely there’s more to it. I still have the statue. Today on Australia Day, I picked it up again.

The foot high Viking stands on a plinth, and is complete with stereotyped fur boots, belt and shield both with invincibility sun patterns, double-bladed battle axe, and a winged helmet surmising god status. He’s much the way I’d like to be.

Vikings of course were Germanic Norse seafarers. They raided and traded from their Scandinavian homelands across northern and central Europe and beyond. King Harold Godwinson, the last Anglo-Saxon king of England, had Viking ancestors. Indeed the name Harold is an ancient Norse name meaning “brave warrior”.

I held him again in my left hand, and touched the features with the fingers of my right. I’ve grown a lot since that first time. My thoughts wandered to the amazing array of different backgrounds of Australians today, and how far we’ve come. After all, today is the 228th anniversary Australia Day, celebrating the birth of modern Australia. The eight month voyage of the First Fleet from Portsmouth, England, to Sydney Cove is the most remarkable migration in history. Australia’s enjoyed incredible diversity and success like few countries ever since.

Recently, challenging my own diversification, I took a genealogy DNA test. I was expecting an Anglo-Saxon and a little west European ancestry. I was shocked to learn that my DNA is 25% Viking from a millennium ago. Perhaps dad knew more than he said way back then.

Click here to get the same Family Finder DNA test that I did.