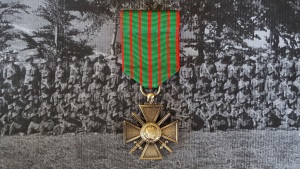 The waterfall bellowed on the Barron River of the Atherton Tablelands in far north Queensland. Frothy foam spiralled skyward straining for the headwaters where the old man made his selection half a century before. Pat was only 79, but life with shrapnel in his chest and a land-clearing axe in his hands was hard work. “It’s nothing about money, anyone can get their own money if they’re any good,” Pat’s nephew said, “but I would just have liked to have had that medal as a keepsake.”

Cecil Storer, or “Pat” in the far north, lived a life full of moments. He manned the trenches at Lone Pine at Gallipoli in 1915, and was one of the last to leave in the evacuation. The following year in France in 1916 – 100 years ago last June – he raided an enemy trench and was shot in the right knee, just before the battle of Pozières.

As the Australians were rushed forward to halt the German offensive in 1918, Cec scouted ahead and was instrumental in dominating No Man’s Land to the immediate front of his battalion. He then led his platoon in an advance, and with a Lewis Gun inflicted heavy casualties on the enemy. Amongst his men that day were Americans getting their first taste of battle.

Brigadier General Robertson, a Queenslander who’d been among the first to land at Gallipoli and wounded that first day, recommended Cec for the French Medaille d’Honneur. He received the French Croix de Guerre instead.

Six weeks after a photograph was taken with other non-commissioned officers, Cec was severely wounded, this time with shrapnel blasting through his back and into his left lung. A piece of metal remained in his chest for the rest of his life.

In 1919 when the war was over and everyone was waiting to go home, Cec faced a general court martial. He and two other sergeants were caught after dark on the grounds of the 14th century home of the Compte d’Oultremont, a Belgian count. They’d been shooting the count’s roebuck deer. The same Brigadier General Robertson found them guilty of trespass, but not guilty of the more serious charge.

Cec came home to his Victorian country town of Branxholme, and then moved 2,000 miles north to draw a Solder’s settlement block on the Barron River. Now known as Pat, he served on the committee of the local racing club, owning a number of winners himself, and was elected to the shire council. The horrors of war revisited him when a boy was caught in the mechanics of his dairy’s milking machine, and was crushed to death.

When Pat died in 1971, the rains had been good and the Barron River was pushing its banks. He was living with some people, and there was a suggestion that some cheques were signed. Not all of his possessions made it to his family.

“I don’t know what happened to his medal,” Pat’s nephew said of the French Croix de Guerre. “I would loved to have had that.”

Now he can. I’ve got one, as original as it can be. The ribbon from the actual Toye Kenning and Spencer looms in England. The replica medal from National Medals in Queensland. A fitting keepsake of the warrior wounded for the first time a century ago.

Click here to order replica medals before Remembrance Day 11th November 2016 and get 10% discount – just say you read about it in History Out There.