Why ghostly memories are flooding back

This month marks the 125th anniversary of the Great Flood of 1893 or the Black February flood for Brisbane and Ipswich in Queensland, which was in fact not one, but three catastrophic events in February of that year. It remains the most devastating in written history for a colony that had only achieved self-government thirty-four years earlier.

The first flood on the 6th of February was a result of the deluge from tropical cyclone “Buninyong”. (In one Aboriginal language, Buninyong means ‘man lying on his back with his knees raised’.) The second cyclone struck on the 11th of February, and the third cyclone on the 19th of February was almost as bad as the first.

The flooding was responsible for around thirty-five deaths, which was a human toll not approached for over a century until January 2011 when perhaps forty people drowned across the state. There is Aboriginal oral history of an even higher flood prior to the first European settlement.

Alex Fairley was a publican in Ipswich who felt the full force of the deadly deluge. His Ulster Hotel on Brisbane Street in Ipswich was completely submerged. The 1893 photograph above shows the flooded devastation, and Alex’s Ulster Hotel is under water at the lowest point in the background on the left. Alex escaped with just his cash box and the money inside. He relocated his family and business up the hill to the Harp of Erin. There he and his family were safer, but not so his cash box. On St Patrick’s Night 1894, it was stolen with about £17 inside, which was the equivalent of three months’ wages.

The continuing calamity proved too much. After a number of convictions for illegal trading, the devastating 1893 floods and the theft, Alex died at the Harp of Erin from a stroke on the 5th of June 1894. He was sixty-one years old. 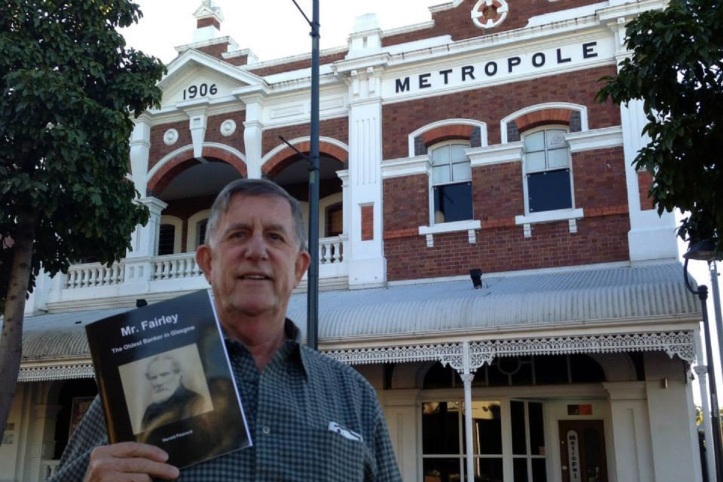 Alex’s Ulster Hotel was rebuilt in 1910 using the original iron lattice and can be seen in Ipswich today. His Harp of Erin was replaced in 1906 by the current Metropole Hotel and continued to be run by his wife and unmarried daughters for a number of years.

The Metropole is still there, and was visited by Alex’s great-grandson for the first time not so long ago, as seen in this photo. Alex is also still there. It’s thought that his ghost walks the upstairs corridors in a vain attempt to protect his lost cash box, and his unmarried daughters, from the railway men in the bar below.

Alex is a subject of my book Mr Fairley: The Oldest Banker in Glasgow published in 2014