Not much has changed at the little wooden 19th century church on the hill in Brisbane’s rural western suburbs. OK, so the split-rail fence is gone, the trees cleared by the settlers have regrown, the belfry has been replaced by a cross, and the bell now hangs alongside. But the people still pack the pews for the important occasions, as I witnessed recently at the 125th anniversary service of Brookfield’s lovely Anglican Church of the Good Shepherd.

It’s comforting to see the church today, and compare it to the black and white photograph taken 105 years ago in 1913. Because so little has altered, it’s surprising that the contribution of the place’s most remarkable family appears to be largely unknown.

On the very first church council was Mr William Butler. His bible is still in the church today, carefully preserved in a neat wooden display case. It’s one of the treasures shown to me by church warden Gaye Johnson, who kindly allowed me to search the grounds for lost history with my Minelab metal detector. I unearthed an ornate brass clasp from an 1880s pulpit bible, quite possibly from the very first congregation. 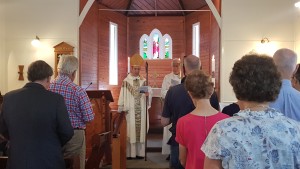 The first church warden was Brookfield farmer Whitmore Logan. His daughter Thirza is believed to be the first child baptised here. She was the twelfth of thirteen siblings, all born at Brookfield. The Logan family served Australia like few others have.

Whitmore was an enormously successful pastoralist after selecting 230 acres in the district in 1871. By the time that the Brookfield church was built in 1893, Whitmore’s family owned 978 acres across Brookfield and Pullenvale.

By the turn of the century, two of Whitmore’s sons served with the Queensland colonial forces in the Boer War. The family then moved to Forest Hill in the Lockyer Valley. It was during the First World War that they joined the realm of the remarkable by having five sons serve abroad, uniquely four of them together in the 2nd Australian Light Horse Regiment at Gallipoli.

Oldest son Thomas Logan served with the 1st Queensland Mounted Infantry in South Africa, and was wounded at Sanna’s Post in 1900. In the First World War, he was a major with 2nd Light Horse and was killed at Quinn’s Post at Gallipoli in 1915. He was leading a charge, the first wave of fifty men of which forty-nine were cut down. This was part of the battle made famous by the 1981 movie “Gallipoli”. A ghostly studio photograph of Thomas is held by the Australian War Memorial.

Whitmore Logan Junior served with the 6th Queensland Imperial Bushmen in the Boer War, was wounded at Mooifontein in 1901, and a decade later spent six months with the British Indian Army. In the First World War, Whitmore served with the 2nd Light Horse at Gallipoli only to be sent home with shell shock. He signed up a second time and went again.

Alfred Logan fought with the 2nd Light Horse at Gallipoli until the evacuation. After the war he joined the Queensland Mounted Police.

Peter Logan served with the Australian artillery in France and was wounded in 1918. He signed up again for the Second World War and was sent to the Middle East.

Youngest son Josey Logan also fought at Gallipoli with the 2nd Light Horse. On the same day that the Logan family was told that Josey had been wounded at Gallipoli, they also learned that oldest son Thomas was killed there.

Another brother George Logan didn’t serve in the war, but was a member of the Queensland parliament throughout the 1920s. The parliamentary records incorrectly show him born at Rosewood.

Grandsons of the fighting Logans continued the family tradition in the Second World War.

Whitmore Logan III served with the Royal Australian Air Force only to be lost in a flying battle over Malaya in late 1941, not long before the fall of Singapore.

Thomas Logan served with the 2/7 Cavalry Commando Regiment in the fight against the Japanese after the Kokoda Track campaign. He and cousin Raymond Logan were killed side by side in late 1942.

Colin Logan was Mentioned in Despatches in New Guinea in 1944 and returned home a hero, having survived the war. 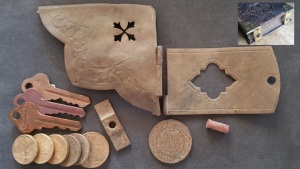 Among the lost treasures that I found at the church, as well as the brass bible clasp, was a 1922 King George V Australian penny. It was probably dropped in the garden during the years in which George Logan served in parliament.

However, it’s the smallest, most insignificant item that I found that’s the most poignant. It’s a simple .22 calibre bullet shell that was discovered buried at the front door. It’s a quiet, secret reminder of the mighty fighting Logans of Brookfield.

The black and white photographs are from the Week newspaper Friday 18 April 1913 page 21, and Brisbane Courier Saturday 3 July 1915 page 13, respectively. The others are my own ©.

Bushrangers, Queen Victoria, hand grenades, and Netflix – all in one family, and now in one chapter in my new book about one amazing house Dovercourt. Please follow the link on my profile to read the story, “A family story with bushrangers, hand grenades and Netflix.”
It’s awesome news from the @awmemorial that one hundred and two years after his death, a First World War Light Horseman has at last been included on the Roll of Honour. Follow the link on my profile to read and hear on @westbremerradio the exciting news, “Light horseman recognised after 100 years.”
I was very excited (and nervous) to be presenting to the owner of 'Dovercourt' the results of my research today! Use the discount code INSPIRE15 through April 9 for a 15% discount for your own copy of the book about this amazing historic home. Follow the
An Irish-born Spitfire pilot, MI5 agent, Tiger Moth, sporting great, Australia’s longest suspension bridge, and pure chance all lead to this amazing story. Follow the link on my profile for the story “Godfrey’s Tiger Moth myth”.
Awesome discoveries inside this tin of old coins - five different monarchs!
My radio segment this Saturday comes from the Royal Queensland Aero Club (where I've done half my flying) and I find out that an incredible Tiger Moth urban myth from 85 years ago is true! Download the app from @westbremerradio and listen live this Easter Saturday morning after 8am (Brisbane, Queensland time).