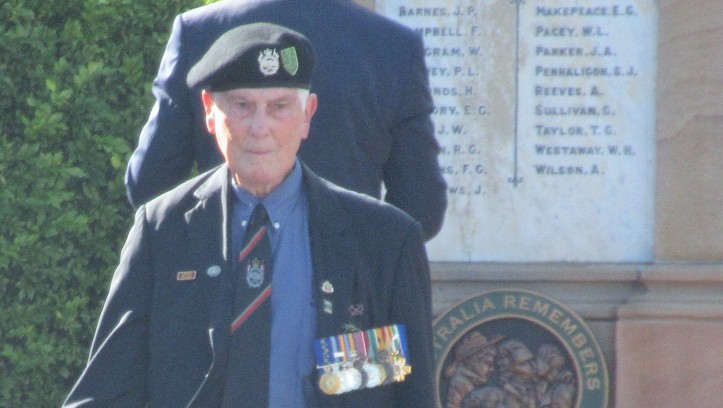 Frank Beattie gave the address at my local Anzac Day service this year. It was about Vietnam’s Battle of Coral and Balmoral, and deviated from those given elsewhere. Frank knew that he only had weeks to live, and so wanted to tell the story of Australia’s bloodiest engagement of the war which is often overshadowed and forgotten in favour of Long Tan. There were 25 Australians killed, and 99 wounded, at Coral-Balmoral in 1968 where Australia’s Centurian tanks played such a pivotal role.

“As a member of the 1st Armoured Regiment Association, I am keenly involved with all things Regimental,” Frank told me afterwards.

“I have done a lot of research into this… the longest and bloodiest battles of the Vietnam War. I was not involved in the battles but believe these battles should not be forgotten,” he said.

“My military career spans nearly 25 years with nearly 2.5 years in Vietnam. My second tour was along the DMZ where I was the northern most advisor for more than a year.” It was during that time that Frank, on a covert mission into North Vietnam, rescued two RAAF aircrew from a downed Canberra Bomber.

Frank’s awards, in addition to the unit citations awarded to Australian Army Training Team Vietnam, included the US Army Commendation Medal for Service, the Vietnamese Cross of Gallantry (with Bronze Star), the Vietnamese Armed Forces Honour Medal 2nd Class, and the Army of the Republic of Vietnam Armour Badge.  He was also awarded the Medal for the Order of Australia.

I included Frank in my story “You will be amazed by stories at your local Anzac Parade” from this Anzac Day.

Frank passed away last month aged seventy-seven, eight weeks after his speech, and I am so pleased that his story was told. Rest in peace.

The photo of Frank is my own from this year’s Anzac Day service.