You will be amazed by your local Anzac Parade 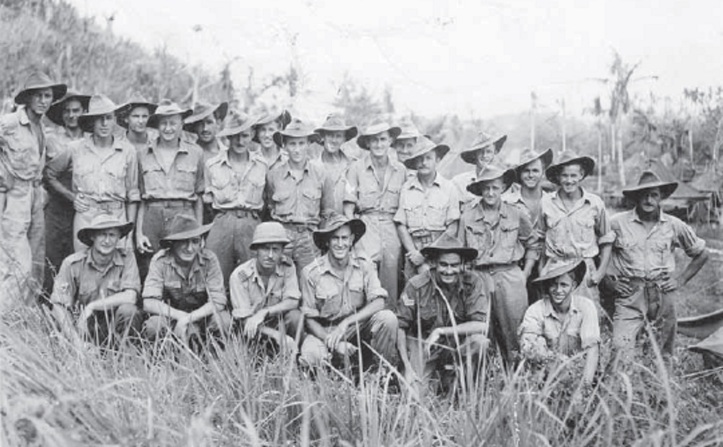 Everyone has a story to tell, and Anzac Day – commemorating the 1915 First World War entry onto the world stage by Australian and New Zealand forces – is the best day to talk, and listen. You won’t believe what I discovered at the parade last week at Kenmore in Brisbane’s western suburbs.

Mac Jamieson couldn’t talk about his service during the Second World War. Like my own father, whose service as a radar operator in the Royal Australian Air Force off the coast of New Guinea, his work was top secret. Mac served as a Kana operator and code breaker, and played a vital role in defeating the Japanese. Mac led this year’s parade while seated in a 1942 American army jeep. I’m not sure how many people at the parade understood the importance of exactly what Mac did. Here’s a photo of Mac in the Jeep this week, and at the top is him in 1945 standing on the far right on Leyte Island in the Philippines, the last year of the war.

The address at this year’s Anzac service was given by Frank Beattie, who completed two tours to the Vietnam War. The first was in 1967 with the Royal Australian Armoured Corps, and the second in 1970 as a Warrant-Officer in the Australian Army Training Team. That’s the same rank and unit in which a cousin of dad’s ‘Specs’ Raffen died there under mysterious circumstances. Frank arrived in Vietnam the month after Specs died. The role was often considered a CIA operative. The address deviated from this year’s theme of women in service, and the centenary of the First World War’s second battle of Villers-Bretonneux. Frank instead told us about Vietnam’s Battle of Coral-Balmoral in 1967, which was the longest and bloodiest of the war, and often forgotten in favour of Long Tan. Frank gave us all the battlefield statistics, but his voice inadvertently broke with poignant emotion when he mentioned the lives tragically lost. His address came from the heart. 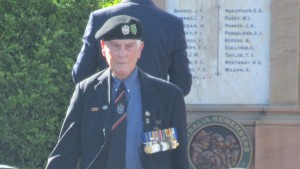 “I was not involved in the battles but believe these battles should not be forgotten,” Frank told me afterwards. “My military career spans nearly 25 years with nearly 2.5 years in Vietnam. My second tour was along the DMZ where I was the northern most advisor for more than a year.” Frank, pictured here, is not well at the moment, and I wish him well.

While enjoying my traditional black tea with Anzac biscuits after the parade, I met Richard. He told me about his grandfather Tom Walton, a selector from Bungonia which is a small town in the Southern Tablelands of New South Wales. His grandfather served in the First World War with the 1st Australian Tunnelling Company, including underneath the notorious Hill 60 of the movie of the same name. In October 1918, the second last month of the war as the Australians had the Germans on the run, Tom earned a Military Medal for gallantry when he continued to build a crucial infantry bridge under constant enemy fire.

It was then that I was introduced to the wonderful Avon. She was dressed in the full military attire of the Australian Light Horse. Her grandfather John Mullins, from Murrurundi a small rural town in the Upper Hunter, served with the Colonial Military Forces in the Sudan War in 1885. Avon said that her uncle later served in the First World War, and was with the Australian Light Horse when they famously prevailed in the Charge of Beersheba in 1917, the last great cavalry charge in history. Avon has been honouring the Light Horse all her life. 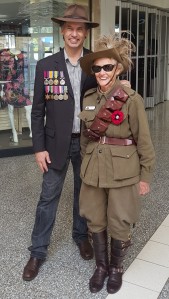 Her uniform was made for her in 1942 when she began riding at civic events with her father and grandfather. She and her husband led the parade on horseback when Princess Alexandra visited Tenterfield in 1959. Her hatband was worn by her uncle in the Charge of Beersheba, and she said that the emu feathers in her hat are from road kill near Winton in western Queensland. Avon has visited the Middle East four times to re-enact the famous charge of her uncle, most recently last year for the centenary. She turns eighty-four this year and still rides.

After we finished our fascinating chat, we walked to the car park together. As Avon was about to get in her car to drive away, she paused, bent over and started fiddling around her boots. She then looked up and explained, “I can’t drive with spurs on.”

It’s brilliant the stories that you hear each Anzac Day if only you look and listen. My respect for those who served continues to build, and I’m now looking forward to next year.