Cleopatra found in a city park

Cleopatra and Queen Victoria were remarkably found side-by-side when I searched near an old Brisbane city park recently. Or at least their stories were uncovered that way, when metal detecting unearthed centuries of archaeology and incredible history.

Musgrave Park is the final piece of the Kurilpa Aboriginal camping ground and there’s still a bora ring there although it’s now buried. Aborigines in the 1840s and 1850s walked from there into South Brisbane to work chopping wood, carrying water, and selling fish. English painter Thomas Baines visited Brisbane in 1855 and produced the attractive painting ‘South Brisbane from the North Shore’ shown above. The reserve was proclaimed a park in 1856, however I discovered relics from both after and before that time.

One more-recent item was a valve stem cover from the wooden wheel of a Model T Ford. Between 1908 and 1927, Ford built over 15 million Model T cars including those from the Geelong plant which closed only recently.

In this photograph (right) captured in Brisbane’s Elizabeth Street at the end of the First World War, men and women pose in a Model T Ford with the valve stem covers on the wheels clearly visible. The names of those people in the picture are lost in time, but perhaps I’ve now found a small item that they lost amid their celebrations. 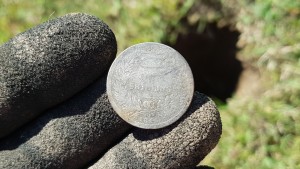 From deep under the topsoil, I travelled further back in time and unearthed a sterling silver coin that was brought from England to Brisbane by the colony’s earliest free settlers.

Brisbane’s convict era of 1824-1842 ended when the Moreton Bay area was opened to free settlement. This English 1846 Queen Victoria shilling (pictured) that I discovered is a reminder of those earliest times of Queensland’s colonial past. Perhaps it was lost by artist Thomas Baines himself.

My detectorist buddy George then made the most remarkable find of all – a beautiful antique sterling silver peridot ring.

Peridot is one of the oldest known gemstones. It was mined from as early as 1500 B.C. and is particularly connected to ancient Egypt where the famous emeralds of Cleopatra were actually peridot gems.

Peridot was first used a talisman and so has a longstanding mystical reputation. It was believed to ward off anxiety, dissolve enchantments, and protect from evil spirits. The high priest’s breastplate, which is described in the Book of Exodus, includes a stone for each of the twelve tribes of Israel, one of which was peridot.

There’s hundreds and thousands of years of history out there everywhere you go. Cleopatra was living in Rome at the time of Caesar’s assassination, so you never know where a stroll even in your park will take you.