This week I responded to an archaeological emergency call to metal detect an historic site that was scheduled for imminent redevelopment. I had just twenty-four hours to save history before the opportunity was lost forever. I didn’t have a moment to lose.

Newmarket in Brisbane was originally called “The Three Mile Scrub” because of its distance from the city. Sale yards opened there in 1877 and the original police station was built on the site in 1900. The weatherboard building there today was constructed in the early 1930s as part of a government building program to stave off the Depression. The location is now privately owned and deserted.

A desktop survey using historic aerial photography confirmed the age and location of the current building as well as the existence of the horse paddock used by mounted police through to the 1950s. Attached to the station was ‘Bantam’ (pictured) one of the oldest ever working police horses that patrolled and paraded well into his twenties. He retired around 1940.

The man most identified with the old Newmarket police station was Sergeant Edwin Michael Creedy (pictured right, and above with ‘Bantam’ in 1930). He served with the Queensland Imperial Bushmen in the Boer War in 1901-1902. On the voyage to South Africa, Ed wrote to his uncle John Creedy reporting that he’d won the heavyweight boxing competition on board, for which he received a medal. In the letter was the winner’s certificate signed by The Honourable Robert Philp, the premier of Queensland who was also on the ship. Upon his return to Australia, Ed signed up with the Queensland Police. Country postings ensued including in the outback at Thargomindah.

Ed’s uncle John Creedy, who had been a councillor on the Rosewood Shire Council, tragically lost his wife and four children in the four years up to 1915. That same year another son Vincent was shot in the head at Gallipoli serving in the First World War. The injury never healed despite a visit to world famous surgeon Sir Alexander McCormack in Sydney the following year. Vincent died in 1921, the year that his cousin Ed Creedy was assigned to the Newmarket police station.

For the final twenty years of Ed Creedy’s thirty-eight years of police service, he was stationed at Newmarket. He and his wife Ethel moved into the police residence (pictured) as soon as it was built in the 1930s and they loved life there. Ed was well-known and greatly liked because of his geniality, humour, and good fellowship. As the Second World War enveloped the Pacific in the final months of his service, Ed helped to establish the first 150 air raid wardens in his district. His old mate ‘Bantam’ retired at around the same time that Ed himself at sixty-years-of-age left the force in late 1940. He showed his successor Sergeant Bob Sabien, whom he’d known when Bob was a young boy in Thargomindah, some orange trees and told him how to prune them. Creedy knew and treasured every inch of the ground.

Ed had problems managing retirement. Six months after leaving the job, and two days after giving Sergeant Sabien instruction how to care for the orange trees, Ed Creedy hung himself in Sedgley Park just metres from his old station. It was from a tree under which he had often sat while grazing his pet cow.

I owed it to the memories of Sergeant Ed Creedy and his friend Bob Sabien to discover what secrets lay underfoot at their old stamping ground, before the bulldozers moved in.

Surface artefact mapping by fieldwalking revealed nothing other than to confirm that my Minelab metal detector would need to do all the work.

What I discovered took me back 120 years to the everyday life at the first police building on the site. There were keys and padlocks, and a broken horse tack brass buckle that was possibly the cause of a fall. I also found the remains of a doorknob from the original 1900 station residence, certain to have been turned by Ed and Ethel before they moved into the new residence. 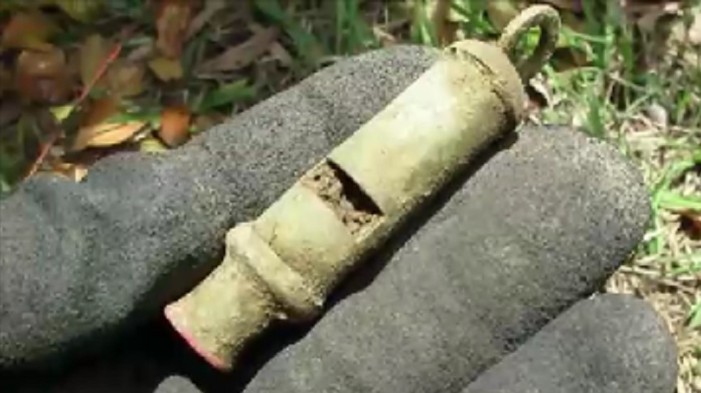 The really exciting find was a whistle (pictured). It was unearthed six inches below the surface near the corner of the current building. My inquiry to the Queensland Police Museum resulted in curator Lisa Jones confirming that it was an Air Raid Police whistle in use by police along with the rattle and gas mask during World War Two. Wow, what a find. I captured the moment of discovery on film.

During the war, the states were given the responsibility of looking after internal security. As Japanese bombs fell on Australia, the police played an active role in soothing community fear over invasion and balancing the tensions between Australian and American troops. Brisbane was swamped by Americans, with around 80,000 stationed here at its peak.

The Queensland police trained 16,000 civilian Air Raid Wardens. Sergeant Ed Creedy started the job in 1940 and Sergeant Bob Sabien completed the training of 200 of wardens in the Newmarket district. The chief air raid warden for Newmarket was Mr Charles Ireland.

Charles himself was remarkable as a pioneer of the motion picture industry in Australia. He started in the “silent” days, owning venues such as Alderley Theatre and the Elite Theatre at Toowong, and was a long-time executive of the Queensland Motion Picture Association. Here he is photographed in 1933 (pictured 3rd from right) when talking films were still in their infancy. Much of the warden training happened in his Alderley complex.

Brisbane’s first air raid alert happened on the 20th of August 1942 when sirens began sounding late in the morning. Air raid wardens including Charles Ireland rushed to the job wearing steel helmets and blowing their whistles. They began clearing streets and directing people to shelters. The alert turned out to be a false alarm, sparked by an unidentified American aircraft approaching from the sea. Newmarket’s chief air raid warden didn’t see out the war, however, passing away in early 1945.

The police officer responsible for the Newmarket wardens in 1942 at the height of invasion fears, Bob Sabien (pictured), had an amazing life. He enlisted in the Australian Army for the First World War, and was wounded at Gallipoli on the 11th of November 1915, the day before Ed Creedy’s cousin got the bullet to the head. Back home having joined the Queensland Police, Bob advanced to the rank of sub-inspector and after thirty-two years in the force was awarded the Imperial Service Medal by the Governor, Sir John Lavarack. Sir John particularly congratulated him on his preparation and leading the Governor’s mounted escorts. Bob had learned to break-in horses while a youth on Sir Sidney Kidman’s Norley station outside Thargomindah, where he first met Ed Creedy.

The Air Raid Police whistle that I found may well have been handled by Ed Creedy, Bob Sabien, and Charles Ireland. It is an amazing artefact that comes directly from those historic times, and these remarkable men. If I hadn’t responded to the archaeological emergency call, their history and memory would have been lost forever.

Now watch this video to see how the Newmarket police station looked when I was there, see the air raid whistle being discovered, and what it looks like now.

BREAKING NEWS – days after the publication of this story, there was a good-news update from the Australian War Memorial which you can read here.