The mystery of the brass bed plate has baffled me for months. It’s only now that I can reveal details of the boy solder who joined the army at fifteen years of age and saw action in the fabled Siege of Khartoum.

When I discovered – buried under a footpath in the Brisbane suburb of Auchenflower earlier this year – a 140-year-old military brass bed plate belonging to Private William Wynne 2592 of the Royal Scots Fusiliers, it spawned the story and short film “Gordon of Khartoum link found”. The tale behind the boy is published here for the first time.

It’s likely that while stationed at Aldershot, soldier John Wynne welcomed his son William Wynne into the world in June 1864. Fifteen years later, John’s battalion was in Enniskillen in Ireland, and that’s where his son William himself enlisted on the 2nd of March 1880. William was under the required age of seventeen and so enlisted only by special authority signed by General E.G. Bulwer himself. This was the Inspector-General of Recruiting, later General Sir Edward Bulwer, who was then at army headquarters having served in the Crimean War and Indian Mutiny.

William had requested specifically to serve in the Royal Scots Fusiliers which was probably his father’s regiment. So the boy with no trade, aged just 15 years 9 months, standing 5’3” with grey eyes, fresh complexion, and light brown hair, began his career in the army.

The Royal Scots Fusiliers was raised in 1678 to be one of the oldest regiments in the British Army, and is the same regiment in which Winston Churchill served during the First World War. Its motto ‘Nec Aspera Terrent’ (Hardships do not deter us) was preparing William for the future.

William celebrated his sixteenth birthday in Ayr, Scotland, however by the time he turned twenty, the young private and his 1st Battalion had joined “The Gordon Relief Expedition”. This is also called The Nile Expedition of 1884–85 which was a mission to relieve Major-General Charles Gordon at Khartoum in the Sudan. Gordon had been sent to help Egyptians evacuate after Britain decided to abandon the country in the face of a rebellion. Only under immense public pressure did British prime minister Gladstone dispatch the Relief Expedition with William Wynne amongst them.

William was in the main British force (the River Column) led by General Sir Garnet Wolseley which travelled on the Nile from Korti to Khartoum. Wolseley’s reputation for efficiency led to the late 19th century English saying “everything’s all Sir Garnet”, which means, “All is in order.” Not on this occasion, however, because William’s column arrived too late to save Khartoum and Gordon was dead. The blame for the failure fell to prime minister Gladstone amid considerable anger expressed in public by Queen Victoria. Gladstone resigned two months later.

My uncle’s great-granduncle Francis Fairley once met Gordon after they both arrived in China in September 1860. Gordon was honoured by both the British and the Emperor of China for regularly leading his smaller force to victory. He was famously celebrated around the world as “Chinese Gordon”, and then fatefully in the Sudan as “Gordon of Khartoum”.

After returning from the Nile, William was posted back to Ayr in 1889 when he was promoted to Lance Corporal. But with only a second class certificate of education, he reverted to private just three weeks later. Crinkill Barracks in Birr in County Offaly, Ireland, became home for a while. The barracks at Birr was burned down in 1922 during the Irish Civil War and only the outer walls remain today.

From Dublin, William returned to Scotland and the barracks in Glasgow. That’s where on the 9th of January 1892, William was off duty when he was involved in an incident in the town in which he sustained a slight contusion of his left elbow that required hospitalisation. No matter, because William was discharged less than eight weeks later on the 1st of March 1892. This completed exactly twelve years’ service and so qualified him for the pension.

William had a plan in mind. Upon leaving the army, he immediately packed his bags – which now safely held his brass army bed plate as a memento of his service – paid his passage to Australia and boarded the RMS Ophir which departed Plymouth on the 12th of March 1892.

The Ophir was a magnificently equipped ship. She was built only the year before and was destined in 1901 to serve as the Royal yacht HMS Ophir, taking the Duke and Duchess of Cornwall and York (the future King George V and Queen Mary) on their tour of the British Empire including Australia.

Having passed through the Suez Canal, the RMS Ophir safely delivered the twenty-seven-year-old William to Sydney Harbour on the 22nd of April 1892. From there the trail goes cold. William from then doesn’t appear in any documentation, no marriage, children, or news reports that have been discovered to date.

That is until in Newcastle on the evening of 30th of July 1929 when William Wynne, reported as sixty-six-years-old, started walking to Armidale which is over 300km north. William had barely left town when he fell into a drain and suffered exposure after crawling for an hour before being found and taken to hospital. He probably contracted pneumonia and died at the Newcastle Hospital three weeks later. If William had lived, his life may have become more difficult with the Great Depression just around the corner. 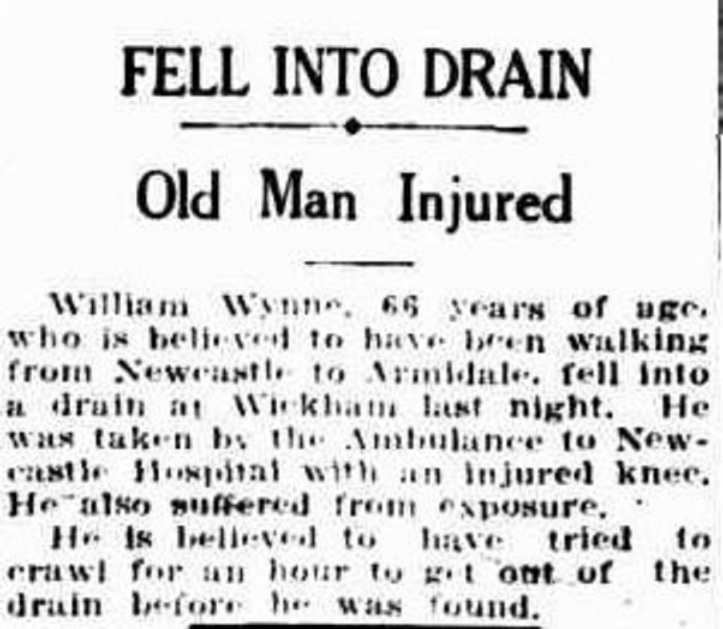 He is buried in an unmarked grave at Newcastle’s Sandgate Cemetery, general section 24, plot 16. Today there’s nothing there to remind us of the boy soldier from Aldershot other than a bare piece of ground with unrelated headstones on either side.

So many questions remain. Why did William Wynne come to Australia within weeks of leaving the army, why walk to Armidale, and how did the bed plate come to be under a footpath in an inner Brisbane suburb?

In 1892 – the year that William set off so emphatically for Australia – Joseph Wynne had been in the Armidale district, at Falconer halfway between Armidale and Glen Innes in northern New South Wales, for at least fifteen years. He was born in Ireland in 1842, survived the Great Famine, and his father William was never far from his mind. That same year in Armidale, Joseph married Elizabeth and they would have at least eight children together. The oldest was named William, however he died in his sixth year, but was promptly replaced by another such was the significance of the name. Joseph and Elizabeth went to live at Ben Venue on the land that today hosts the Ben Venue public school. Elizabeth died there on the 16th of April 1929, and three months later William Wynne set out on his fateful walk from Newcastle.

Perhaps William left the army to come to Australia in 1892 because he had listened in awe about his relative Joseph’s success and pending marriage in Armidale. Maybe he heard of Elizabeth’s death in 1929 and lacking the funds to ride the train, instead opted to walk to be with his relatives.

In 1892, there was also a Francis Wynne living in Murray Street, Rockhampton, Queensland. Francis was born in Ireland in 1840 and was the youngest son of Frederick Wynne of South Main Street, Cork. Francis married Margaret in 1881 and their only child Mary Josephine was born four years later when William was in the Sudan. For around fifteen years from the late 1950s to her death in 1972, Mary Josephine lived at 19 Park Avenue, Auchenflower. I found William’s army bed plate buried just around the corner in that same Brisbane suburb.

Joseph and Francis were of similar age and a generation older than William, so perhaps they were cousins of his father. Francis’s daughter Mary Josephine never married and died childless. When she passed away in her Auchenflower home, my mind’s eye can clearly see the gift from her cousin left in the street as her home was being cleared.

We may never know the full story for sure. However, the tale of William Wynne, the boy-soldier from Aldershot who tried to save Gordon in the Siege of Khartoum, is an epic one. Despite William himself dying on the other side of the world after crawling in a ditch, he will not be forgotten as a result of me making a chance discovery while metal detecting along an Auchenflower footpath.