Galloping through the halls of history 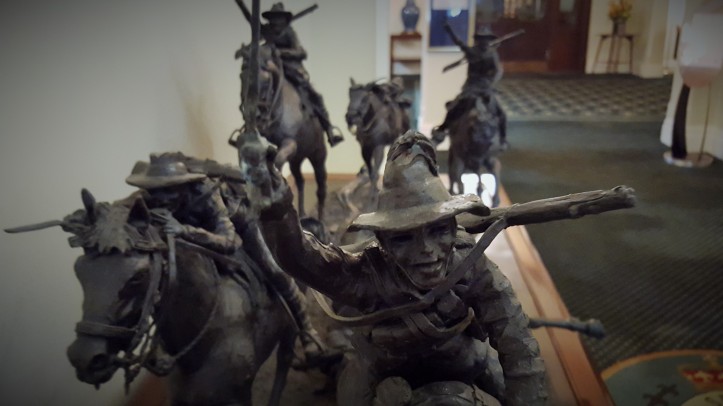 Three days without water. Five hundred riders and horses. Headlong thundering charge, bayonets in hand, rifles slung across backs, at full gallop under the guns. Ninety-eight years ago on the last day of this month, the Charge of Beersheba by the Australian Light Horse uniquely became instant legend. History’s last great cavalry charge. The pounding hoofs, thundering guns, yelling men, and tingling neck, can still be felt today. In the halls of a treasure that should be better known, Brisbane’s United Service Club. Founded in 1892, it predates Australia itself.

The club consists of two historic buildings. One a gorgeous 108 year old timber home, the other a 105 year old brick structure built on the site of an 1864 building of the same name. It’s once inside that the magic begins.

A labyrinth of rooms draw you through wood panelling and a stunning array of art, sculptures, and silverware. Reading, billiards, bars, dining, library, meetings, professional suits, overnight accommodation, even city parking for members. You need never leave. The magnificent First World War honour board at the entrance is carved from Queensland Maple. Of the 100 Victoria Crosses awarded to Australian servicemen, 70 are displayed at the Australian War Memorial in Canberra, and 2 are here. Robert Beatham earned his in France in August 1918. Two days later he was riddled with bullets. Blair Wark was awarded his after three remarkable days in France in September-October 1918. Their crosses add to the reverence of this place.

“Monty” Field Marshal Lord Montgomery visited here in 1947. He joined a venerated group of life members including global flying pioneer Sir Charles Kingsford-Smith. Captain George Hunt is the most highly-decorated former member. He sank more enemy ships than any other British submariner of the Second World War. He is also donor of a particularly poignant painting of submarine AE2 at the Dardanelles, by maritime artist Don Braben.

My favourite artwork is the bronze depicting the Charge of Beersheba by acclaimed sculptor and drover the late Eddie Hackman. He also did the celebrated signature statue at the Stockman’s Hall of Fame in Longreach. Five troopers, six mounts. Their noise, determination and movement is frightening. Like ghosts of those remembered, the sculpture gallops through the halls. The sounds that you sense are tingling.

Photo credits:
Charge of Beersheba by Eddie Hackman – my own
Field Marshal Montgomery (1943) – courtesy of the Imperial War Museum