Bruce and that photo 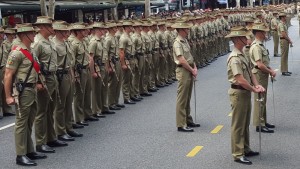 Well-presented soldiers march in line, uniforms pressed, boots in time, guns and sabres at the ready. Past government buildings, and a right turn to the central square. Progress is stopped by the civic police, challenging their right to enter the city. It’s the formalities of a tradition going back a quarter of a century, Brisbane’s own 6th Battalion, Royal Australian Regiment, given the Freedom of Entry to the City again.

Over the weekend it was to celebrate the battalion’s Golden Jubilee. Honoured by the Governor of Queensland, the Brisbane Lord Mayor, and a Civic Reception. The battalion is based at Enoggera Barracks where it was raised 50 years ago. It’s served in South Vietnam, East Timor, Iraq, and Afghanistan. It rescued Brisbane’s spirit following the dreadful 1974 and 2011 floods. And there’s a list of heroes as long as Adelaide Street.

In 2012 Corporal Daniel Keighran from 6 RAR was awarded the Victoria Cross for his actions in Afghanistan two years earlier. Then there’s the banana plantation in Vietnam in 1966. For over three hours in torrential rain, 108 men of D Company withstood an attack by 2,500 Viet Cong and North Vietnamese Army soldiers. They fought for their lives, calling in artillery support from 5 kilometres away that ripped through the palms, ammunition was dropped from RAAF helicopters skimming the tree tops. They were joined by B Company, and then A Company in armoured personnel carriers. The action became known as the Battle of Long Tan.

While those events live in the minds of Australians, it’s an image captured two days later that visually recalls 6 RAR’s achievement there. Private Bruce Dye from C Company went on the risky laundry run from the Nui Dat base into Baria. A large banner appeared, 12 feet long, 3 feet high, well-painted red and black lettering on a white material, supported by two dowels strung between poles either side of the road. It was there in front of him, and he took a photograph. It disappeared just as suddenly. Bruce’s photograph is the only record. “People of Phuoc Tuy province warmly greet the heroic victory of the Royal Australian Forces in destroying the 45th North Vietnam Regiment on 18 August 1966”. The Australians had won the hearts of the province, and were never attacked in force again.

Bruce volunteered, he knew what he was in for. His father and family had done likewise in the Second World War 20 years earlier. His father’s cousin was killed in Greece, and the husband of another cousin died while escaping the Japanese in Rabaul. Bruce’s grandfather had two cousins killed on the same day in the First World War. The selfless service of 6 RAR has won the hearts of Brisbane, for which the city proudly opens its streets again.