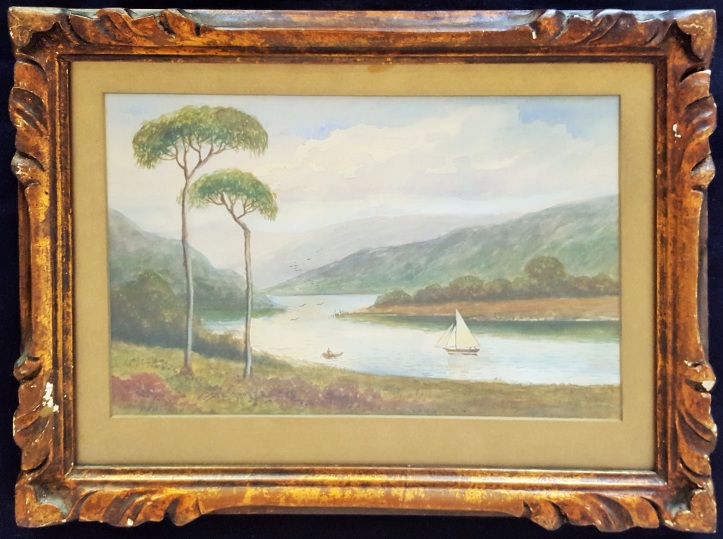 Overlooking Lane Cove in Sydney, Francis dreamt he was at home in Sunbury, one of those pleasant England villages lying on the Thames. He painted what he saw. Simple and naïve, life on the water, and trees from his English garden. He just couldn’t get used to those Australian eucalypts.

It was about 125 years ago this year, that Francis Flockton painted his watercolour “Sailing Lane Cove, Sydney” in the final handful of years of his life. He was the first of five generations of artists to grace collections to this very day.

His daughter Margaret Flockton was a botanical watercolourist, who for 40 years was the official artist for the Sydney Botanic Gardens. She was Australia’s first female lithographic artist, and her work was acquired by the Trustees of the National Art Gallery. The Margaret Flockton Award for Scientific Botanical Art today attracts entries from around the world. Francis’s granddaughter Phyllis Clarke was an Australian Museum artist. His great-granddaughter Julia Woodhouse was also a talented artist who attended the National Art School where her teachers included William Dobell, and she came under the influence of Desiderius Orban. Francis’s spirit today lives through his great-great-grandson, Newcastle artist Andrew Dennis.

Francis lived for a while at Hampden House, a mansion occupied by his father and a succession of London businessmen and merchants during the 19th century. That same stately Englishness is seen in “Sailing Lane Cove”.

I bought the painting a while ago, lured by curiosity about the person who painted it so many years before. Francis begat a significant artistic legacy with his ensuing generations. He also left this delightful painting for me, but he still hasn’t got those Australian eucalypts right.

Thanks to Louise Wilson, great-great-granddaughter of Francis