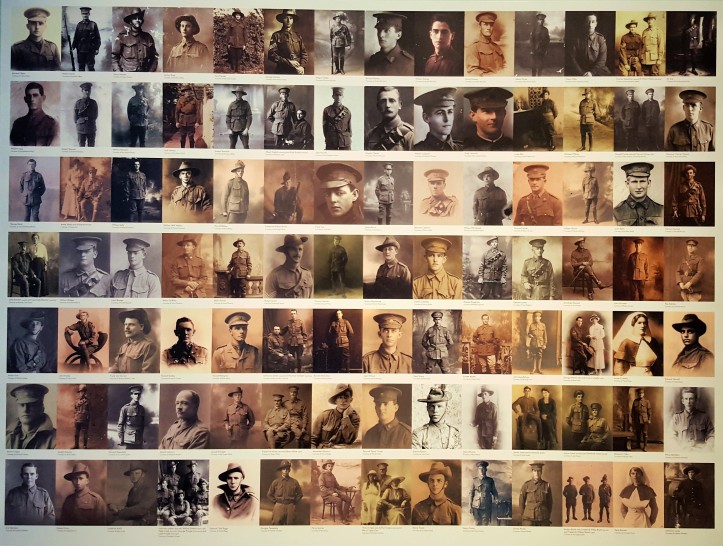 From beyond your periphery, two faces grasp your soul with a stare perplexingly familiar. Others rain down like tears to herald the ghostly shiver when you realise you’re looking at yourself. This is the emotive tribute launched this week by the Museum of Brisbane to mark the centenary of the city’s first Anzac Day parade in 1916. It’s simple, and could not be better.

The two central players are layered images of 100 soldiers and nurses from the 400,000 Australian men and women who enlisted in the First World War. The result are two ethereal faces who we know, but have never met. They culminate a visual and audio expression that breaths life, drawing you into their being with self examination. The cascading portraits are loved family members contributed by the public.

The numbers were staggering. Almost 40% of the eligible male population in Australia signed up, 40% had their bodies shattered, 15% never came home, those who did were never the same. The exhibition Facing World War 1: Stories of Loyalty, Loss and Love shares some Brisbane tales.

Tom Brennan, hero, policeman, and poet. His work written in the shadow of shellfire is chilling. Home for mental convalescence, he falls to his death from the balcony of his city boarding house. Jock Willis, comedian and musician. He came home to a very changed world. His original musical score was recorded for the exhibition, and it’s heard for the first time since 1916. This is a magical, emotional display. Even the hand written letters speak.

You may not recall many of the names of those Australians who fought for us a hundred years ago, but after visiting the museum, you’ll remember all their faces. Layered as one, flanked by tears.

And we hollowed a space in the solemn stone
For the names they’d “immortalled,” which none could tell
Save God, to Whose silence their souls had flown,
And the still’d tongues holding His secret well.

From Our Nameless Dead, Tom Brennan, 1915

Facing World War 1 continues at the Museum of Brisbane, City Hall,  until 28 August 1916. Entry is free.