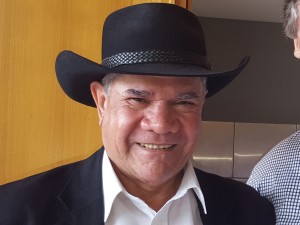 “It totally flabbergasts me,” he says in his own soft tone from under a stockman’s hat. Six children of a black digger taken off their mother while the father was away serving in the Middle East. That’s just one story uncovered in an academic study, led by this Yawuru man from the Kimberley, director of the National Centre for Indigenous Studies at the Australian National University. He’s Australia’s first indigenous lawyer. Even he finds the tales so amazing that he needs to test their accuracy.

Professor Mick Dodson says that he must link the indigenous oral histories to documented history to “sure up” the truth. Sometimes memories can be a dangerous thing, he says, particularly when referring to the First World War a century ago, because it means relying on second-hand memories. But the stories he relays here are all true.

Willie Cummings was an aboriginal man desperate to enlist. Due to the requirement to be substantially European, he signed a statutory declaration. “My father was a White man born in Queensland, and my Mother was a half caste born in Queensland … I have lived all my life with white people. I am not of German, Austrian, Turkish or Bulgarian descent.” That might sound astounding today, but those were different times.

Then there’s Cape Barren Island off the north east coast of Tasmania. It had the highest enlistment rate in the whole of the British Empire, and one third of them were indigenous. A man arrived at Mick’s yarn-up carrying plastic shopping bags. His grandfather had served in the Great War at Gallipoli, got sick and was evacuated, recovered and was killed at Fromelles. In the plastic bags were medals, diaries, names and addresses of everyone he wrote to, everything his grandfather had on him when he died. Mick smiles as he recounts these things, all a hundred years old, kept in plastic bags. When told that perhaps he might take them to an archive for safe keeping, the man said no, because he can’t give the family stuff away. Mick asked why his grandfather and so many others there had enlisted. The man responded rather laconically, “There’s not much to do here on Barren.”

Overwhelmingly the families say that grandad went to the war because he thought things would be better when he got home. They weren’t. The returning diggers, although treated as equals at the front, were sent back to the missions when they returned.

Serving Our Country is a four year research project that explores the history of Aboriginal and Torres Strait Islander service in Australian defence and auxiliary services from the 1890s to 2000. They were supposed to do yarn-ups with descendants of 100 soldiers. So far they’ve done 186, and have 2 more to go.

These stories are important to aboriginal people so that service to our country is recognised. “Only then will we have a shared history,” the professor concludes. Each story more fascinating and flabbergasting than the last.