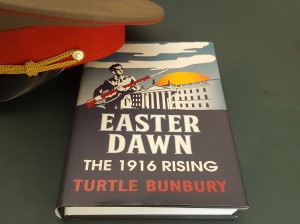 A tall, gaunt, sombre, aristocratic figure, pondered. They might go to war over a mere scrap of Belgian paper. He leaned forward, held a different document flat on the mahogany surface, taking the pen in his right hand, he dipped it in dark ink, and authorised plans to destabilise Britain’s colonies. The chancellor of the German Empire, Theobald von Bethmann-Hollweg, plunged what was seemingly safe from the battle front into chaos. Ireland, India, Singapore, and beyond. This year marks the centenary of Ireland’s 1916 Easter Rising, and the 2016 release of popular historian Turtle Bunbury’s book “Easter Dawn: The 1916 Rising”.

A squadron of German battlecruisers fired on the British coastal ports while zeppelins dropped bombs along England’s east coast, in a co-ordinated attack to divert from Ireland’s intended revolution. It’s said that the Irish leaders had the Kaiser’s youngest son in mind as a possible king of Ireland in the event that Germany won the First World War. And so was the start of six days of rebellion that culminated in the prolonged execution of many of its leaders.

Bunbury writes with the flair of a story teller, the detail of an historian, and the empathy of a friend. He brings people to life with their environmental and genetic influences explained, allowing us to easily place ourselves in the shoes of others.

The Rising was that of a band of poets and revolutionaries. The book’s title “Easter Dawn” goes some way to explain how this romanticism arose. Not only because of the participants, but also how it was remembered. The title comes from a 1916 poem by Joyce Kilmer that itself quotes William Butler Yeats. Bunbury continues with a line from George Bernard Shaw, “The military authorities and the British Government must have known they were canonising their prisoners.”

In rapid fire Bunbury introduces the Rising’s contributors in eminently readable fashion. Leading up to the Rising, best-selling spy novelist Erskine Childers completed one of the most daring gun running missions in modern history, skippering a two-masted yacht into Ireland with 900 German rifles and 29,000 rounds of ammunition.

The father of Michael Rahilly, later the self-titled The O’Rahilly, was the wealthiest man in Ballylongford, Kerry, who had the first refrigerator in Ireland. Kerry-born Thomas Ashe who commanded rebels in County Meath, was cousin of actor Gregory Peck.

In trials following the Rising, Boss Shields was told to stick to acting, so he went to Hollywood where he became a great friend of John Wayne, Henry Fonda, and James Cagney. Constance Markievicz escaped execution due to her gender. In 1918 she became the first woman elected to the British House of Commons. Later as minister for labour of the Irish Republic, she was only the second woman in Europe to be a government minister.

The son of rebel John McBride became a prominent human rights activist, co-founding Amnesty International, and in 1974 receiving the Nobel Peace Prize. John Lowe served as aide-de-camp to his British general father to whom the surrender was given at the close of the Rising. John went onto become Hollywood star John Loder, appearing in Paramount’s first talking film, and later opposite Bette Davis.

Bunbury’s book reveals many surprises. The commander of the German U-boat that brought Roger Casement to Ireland in his abortive gun running in 1916, went on to sink 36 allied ships in the First World War. In 1966 he was an official guest of the Irish government at the commemoration of the 50th anniversary of the Rising. There’s still more to learn with Bunbury’s outstanding “Easter Dawn” on this the 100th anniversary.